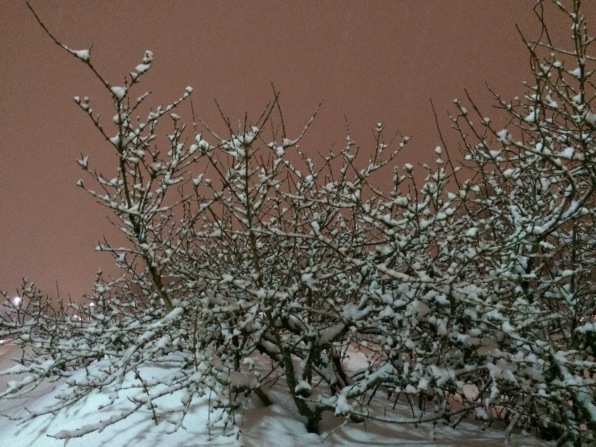 I was working on a long piece yesterday, in the dating vein, once again expressing exasperation with the behavior of everyone involved—men for disappointing and hurting me, myself for not being savvy and tough enough to know better. Anger, bitterness, loneliness—you know, the usual fuel for my scintillatingly-witty observations. I was almost ready to post, but stopped: it was just too much, too negative, if not for you all, then for me, at least for today. But then I thought, what else can I write about that’s more fun, and upbeat and uplifting?

I realized: I got nothin’. The well is dry. Tapped out. Or, more accurately, the sap is just all frozen and still, and won’t be running properly again for weeks. It’s not writer’s block, exactly, so much as it’s just the absolute lowest point of the year for me, and I have little to say about it.

Well, fine—who are we kidding?—I can say quite a bit.

We’re enduring one of the worst winters in modern history in the Northeast. Record-breaking cold, record-breaking snow falls, and record-breaking incompetence on the part of civic infrastructure and negligent landlords. Buildings are collapsing; snow, ice, and wind are relentlessly tearing houses apart; we scurry past massive, vicious, ice stalactites; we use government-issued technology (the city’s reporting app) to turn in our neighbors for not shoveling their sidewalks; we find ourselves almost-kind-of-hoping that we’ll slip and fall so that we can sue the bastards and teach them a lesson, and fund a permanent relocation to the south of France. Stuffing ourselves into the scrum to get onto a rare train, we end up suffocating under the physical, auditory, and olfactory onslaught of backpacks, fast food, sniffling noses, unbrushed teeth, overly loud music, and general rudeness. We think violent, antisocial thoughts about our fellow commuters, who lack our superior, Sesame-Street grasp of the basic principles of cooperation.

We’re all tired—of stumbling over snow and ice for miles rather than waiting for buses and trains that never come; of being stuck indoors, with no human company, for days at a time; of having one event or another cancelled because of blizzards; of scrambling, frantically to make up for lost time at work, at the gym, in our social lives.

Everything hurts at this time of year. Taking stock the other day, I realized that I had 8 things actively wrong with my body—chronic tendinitis here, compressed nerves there, mysteriously-enduring stomach upset, a cold, a sore back from shoveling snow. Sleeping with a special (super-sexy) splint helps the nerves, but it’s otherwise quite uncomfortable, unless I use extra pillows, which then make my neck and shoulders—already stiff from being hunched against the cold—stiffer still. People exhort me to take plenty of hot baths—except I’ve picked up a stubborn case of athlete’s foot from the gym and the thought of sitting in the same hot water as my spores (really, how good can my mood get?: I have SPORES) only makes me more nauseated.

Trapped in my neighborhood by a lack of public transit, and unable to get to the gym, I figured I’d get my workouts by shoveling out my car. More pain and stiffness, for little gain. The plight of my poor car has unfortunate parallels with tales of failed arctic expeditions in the 19th century. At a certain point, I was able to get the car to start, but it was hopelessly frozen in the icy, unpaved ground on which it’s parked. Then the battery failed altogether. Like Shackleton, I find myself weighing the option of staying with the doomed vessel, or striking off for safety, hoping to reach civilization again before supplies run out, and we all turn on one another like animals.

Years ago, when life and graduate school took me to the Canadian prairies, I discovered that I suffer from just a smidge, just a soupçon, of Seasonal Affective Disorder. But SAD isn’t quite the best name for my mood. The cold and—in particular—the darkness doesn’t exactly lower my spirits so much as inflame them: exacerbated by the weather, my usual levels of anxiety and melancholy intensify, stripping my nerves raw, ultimately manifesting in an impatient, unforgiving, pervasive fury. Getting stuck in a narrow, icy track behind college kids shuffling along in Ugg-induced decrepitude; enduring adults snuffling and re-snuffling the same couple of tablespoons of mucus; needing some peace and quiet, and being accosted by loud, flat, banal conversation, or people chewing or breathing…it takes next to nothing to leave me feeling indignant, exhausted rage.

(And dimly, I’m aware that my crankiness is in turn making someone else’s day less pleasant. Have I mentioned that Niagara Falls has frozen over? Ever read Wharton’s Ethan Frome? Winter in the Northeast is serious, and it takes a severe toll).

We are all complaining of having gained weight. It’s a ritual here to prepare carefully to survive blizzards—by stocking up on chips, wine, and desserts. And we’ve had a lot of blizzards. Confined to quarters, we cook and bake, and since no-one can get to anyone else’s house, we eat it all ourselves. Trying to be the Strong Independent Woman takes a lot of work under the best of circumstances—putting out fires at work, warming the enthusiasm of colleagues and students, attempting to look hot everywhere we go just in case we meet The One when he crests a giant snow bank to manfully ask for a jump (even though, in reality, I’m the one who needs it more—I’m talking about car batteries, obviously, and even though our lingerie has been nothing racier than thermal underwear for weeks). Add to that the additional physical and mental energy it takes to get anywhere, to do anything—and we’re all suffering badly from ego depletion. Like our poor car batteries, our will power has been frozen into a sluggish unresponsiveness, which calls out for additional fuel—in the form of leftover Christmas, then Valentine’s, candy, followed closely by early Easter candy.

Struggling into a skirt—it should be tight, but not that tight!—it occurs to me that perhaps, rather than eating my feelings, as the saying goes, I should practice mindfulness, instead. I mustn’t avoid or deny; I must allow myself to really feel my feelings, observing them with compassionate non-attachment.

I stare into the roiling maelstrom that rages through the otherwise void expanse of my soul, and promptly burst, explosively, into a fit of tears. Which I must immediately shut down because I’m on a public street, and, more crucially, it’s so cold that if my mascara gets wet, it will freeze, then melt in grotesque fashion as soon as I step indoors. (A lesson learned during Canadian winters that I thought I’d no longer need).

It occurs to me that humans have adapted to repress their feelings, blunting and anaesthetizing them through various means, for very good reason.

You can’t stop the earth from tilting away from the sun, into cold and darkness, for several months of the year, any more than you can control a large majority of the people and events which cross your path. You can, however, soothe yourself any way that works, any way that resources will allow. You must do so, in fact, if you’re to endure.

Desperate times and all that.

I buy myself expensive, wonderfully warm boots. I fill my freezer with homemade cookies, and lentil soup. I give up on Dry February, but also invest in a trainer at the gym. I cajole some friends into booking a group expedition to Cancun. I remind myself that it’s all just weather, and, sooner than later now, the earth must tilt back into light and warmth.

I blot my damp mascara, blow my runny nose, stuff the already-frozen tissue in a pocket, and stop in to a cafe to buy a restorative cake pop.

Writer, editor, researcher, educator, and dancer. Will opine for cash, pastry, or attention.
View all posts by farkasca →
This entry was posted in Uncategorized. Bookmark the permalink.

1 Response to On Endurance